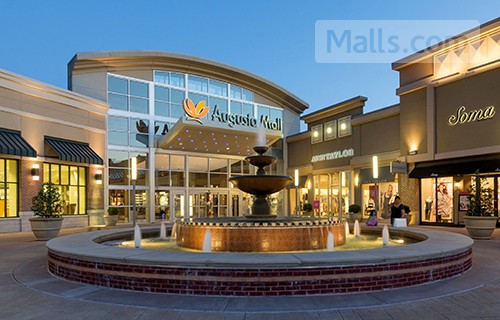 PRO-INFORMATION
EDIT TEXT
Augusta Mall is a two level super-regional shopping mall located in Augusta, Georgia. It opened on August 3, 1978, one week after the now-defunct Regency Mall. It is one of the largest malls in the state of Georgia, and it is the largest mall in the Augusta metro area.

The Augusta Promenade is the newest addition to the Augusta Mall, and is 180,000 sq ft (17,000 m2).[2] Construction of the development started in the Summer of 2006, with a grand opening of November 8, 2007.[3] It brought many upscale stores and restaurants new to the area, many that are new to Georgia outside of Atlanta. Some of these stores and restaurants include Williams-Sonoma, The Walking Company, Sephora, The Buckle, and P. F. Chang's China Bistro.
Anchor stores
Current
Dillard's — formerly J.B. White, became Dillard's in 1998 shortly after move from Regency Mall
JCPenney — opened in 1979
Sears — opened in 1990, replacing free-standing location in downtown Augusta
Macy's — formerly operated as separate Macy's and Rich's locations, the two stores merged into the Rich's location in 2003 (branded Rich's-Macy's); store didn't change exterior Rich's sign until they officially became Macy's in 2005
Dick's Sporting Goods — opened October 2007 in the original lower level of the old Davison's/Macy's building
Barnes & Noble — opened Fall 2008 in Promenade section, replacing former location on Augusta West Parkway.