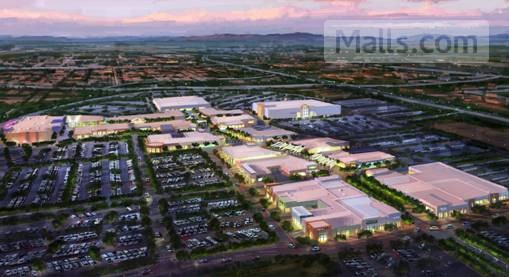 BUSINESS CONTACTS
EDIT TEXT
As the Southwest Valley’s first super regional shopping center, Estrella Falls is poised to make Goodyear a prime regional destination. The regional mall will bring a new distinctive destination in a design that’s comfortable all year-round. The shopping mall itself covers 105 acres between McDowell Road and Virginia Avenue, east of 151st Ave. The 1.2 million-square-foot shopping center is anticipated to open in Fall 2011 before the holiday shopping season.

Estrella Falls is a regional shopping mall complex under development by Westcor, to be located in Goodyear, Arizona, about 20 miles west of downtown Phoenix. It is composed of two sections: one being a power centre called The Market at Estrella Falls, and the other being a mixed-use regional center which will include residential and hotel space.

Anchor stores committed to the project are Dillard's, Macy's and Harkins Theatres. Originally slated for opening in 2008, the shopping center portion is now scheduled for a 2010 opening.