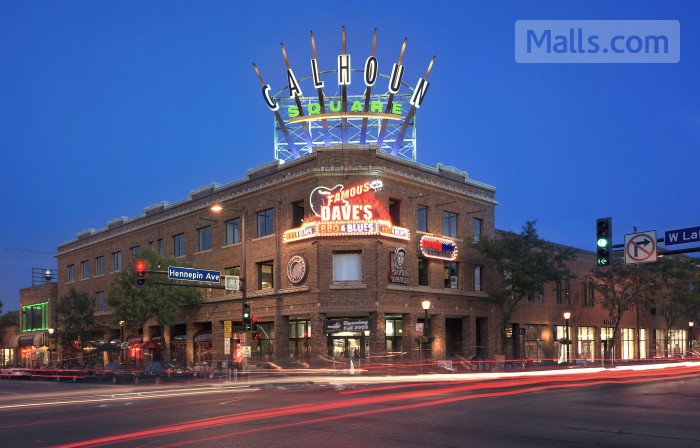 The mall was built at the southeast corner of Hennepin Avenue and West Lake Street in the early 1980s. Neighborhood activists opposed to the project started the "Dump Updale" campaign. "Up" referred to Uptown; "dale" was a reference to suburban shopping malls in the Twin Cities whose names end in "dale" (e.g. Southdale Center, Ridgedale Center). The atrium-style indoor mall was built fr om a group of older buildings in an early 1980s style of redevelopment. The building was finished in 1983, although parts of the building are older, including the Geanakoplos Building (1917).

The site wh ere Calhoun Square is in the process of being redeveloped, although portions of the plans have been postponed. The mall's stores still operate. A new two story addition is under construction on the northeast side of the mall (southwest corner of Lake Street and Girard Avenue) that will house LA Fitness on the second floor and a new restaurant on the ground floor. A two-story addition on the southwest corner of Calhoun Square is under construction, which will house new two-level space for Kitchen Window and a new building entry. Two additional levels were added in 2009 to the parking garage.

Future phases of Calhoun Square were approved to include a seven story residential/retail building on the south side of Lake Street between Fremont Avenue and Girard Avenue just north of the parking garage. A new five story residential/retail building on the southwest corner of Calhoun Square (northeast corner of 31st Street and Hennepin Avenue) was also approved. Those phases are not currently under construction and their timelines have not been set.