PREIT plans to invest a whopping $100 million in remodeling the venerable shopping center.

Click here to subscribe to Malls.Com's weekly email newsletter for free
Philadelphia-based PREIT knows that it has a hidden gem in its portfolio in the form of the Woodlands Mall in Grand Rapids, Michigan, and the publicly traded real estate investment trust has some huge plans to help the mall realize its full potential. As MLive shares, PREIT plans to invest a whopping $100 million in remodeling the venerable shopping center.

Joseph F. Coradino, CEO of PREIT, offered up some thoughts in a previously released statement announcing the project. "The redevelopment of Woodland Mall is an incredible opportunity to allocate capital to fortify one of the strongest assets in our portfolio. Through the recapture of Sears and signing of Von Maur, we're proactively reducing our exposure to select department stores, while simultaneously offering exclusive, high-quality retail and dining experiences that will continue to fuel traffic and high sales at the property," the statement read in part. 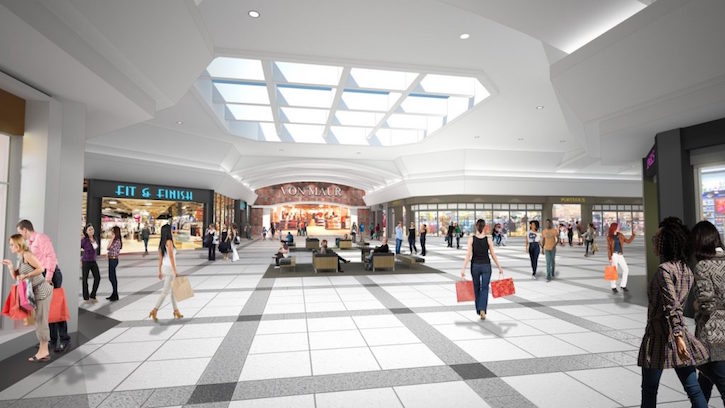 Coradino was referring to one of the biggest parts of the project. Long-time anchor tenant Sears will be closing its doors at the mall later this month, and the 300,000-square-foot store will be divvied up and reconfigured slightly. Among those that have already signed on to occupy 90,000-square-feet of the reconfigured space is upscale retailer Von Maur. The retailer will primarily serve as the anchor for the redesigned spot, while a 60,000 square-foot junior anchor store is also slated to slide into the mix.

Michael A. Khouri, PREIT’s vice president of leasing, recently came to town to provide some additional details on the previously announced project. "This is a pretty big investment," he said.

Smaller shops, restaurants and what’s being described as "lifestyle-type tenants" will occupy the remainder of the space, with the latter category being eyed for two new buildings that will be constructed as part of the remodel. All told, the redesign is expected to take about two years to complete, but the mall will remain open during construction. It sounds like PREIT is leaving no stone unturned, as additional plans call for a new entrance, "a cool area for sitting and dining outside," and a much-needed redo of the parking lot.

"We have looked at the entire project, and the parking lot is terrible. As part of this redevelopment, we are going to take care of the whole area," Khouri continued. It sure sounds like Woodland Mall shoppers have a lot to look forward to, as PREIT is prepared to reawaken one of its signature retail properties.