British luxury shoe brand Kurt Geiger is planning the opening of a flagship store in London after the brand enjoyed a sales increase of 13% in the third quarter of 2014.

While economies worldwide are still on the rebound after the decline of 2008, and the retail market is still a tough environment, management at Kurt Geiger is looking to a renewed focus on expansion and growth of their brand.

The chief executive of Kurt Geiger credits the company’s increasing success to the introduction of its Bond & Britton high heels and its Saffiano handbags. As American and international celebrities have embraced the company’s new products and stars like Beyoncé and Julia Roberts have worn them at major Hollywood events, the reputation and popularity of Kurt Geiger products has continued to soar. In particular, this year’s introduction of the Saffiano handbag line has boosted the company’s overall handbag sales by over 50%. British actress and model Rosie Huntington-Whitley was spotted carrying Saffiano’s red bowling bag in Hollywood, further increasing the brand’s cachet. And it isn’t only female celebrities who are flocking to Kurt Geiger. Actors Channing Tatum and Jon Hamm have both been photographed wearing items from the Kurt Geiger men’s collection. 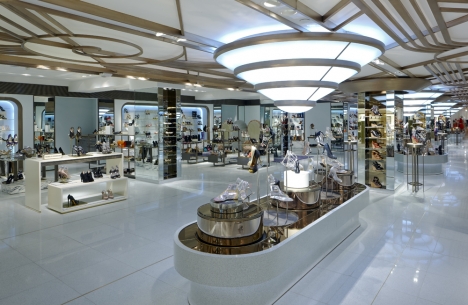 In April, the company was bought out by its chief executive and has been experiencing an amazing year. The new management has focused on expansion at home and abroad and on trying to appeal to all shoppers. While the company’s original lines were priced between £250 and £295 for a pair of shoes, its new Shoeaholics website offers men’s boots and women’s heels and flats for anywhere from £19 to £29 a pair. The goal is to make the company affordable not just for Hollywood stars, but to all fashion-savvy consumers.

This year, Kurt Geiger has opened 28 stores worldwide. Twenty-nine of those locations are within the UK, and one of the new locations is a flagship store in Milan. The company’s other new shops are located in China, Singapore, Hong Kong and Thailand. Kurt Geiger now boasts 59 stores worldwide, with an additional 198 retail locations inside major department stores. The company also runs multi-brand shoe departments inside Harrod’s, Selfridges and Liberty department stores in the UK.

The proposed London flagship store is set to open in early 2015 in the Oxford Street area. Prior to that date, the company will also open another retail location in London’s Bicester Village shopping center.