The Gateway shopping center in Salt Lake City, UT, a property holding of Retail Properties of America, Inc., has been experiencing an increasing downturn in performance, leading its parent company to write down the property’s carrying value to $75 million, a reduction of 35 percent.

The 623,000 square foot Gateway center, located in downtown Salt Lake City, is situated in the heart of a section of the city that houses residential apartments, entertainment venues and retail offerings. Since 2012, the once-bustling lifestyle center has faced stiff competition and declining sales due to the opening of another downtown mall, Taubman Centers Incorporated’s City Creek Center. When City Creek opened, 16 retailers left Gateway Salt Lake to set up shop in the newer mall. Last year, Retail properties launched a $2 million renovation of the Gateway center in an attempt to compete with City Creek. However, due to Gateway’s poor performance and questions about its future viability and occupancy led its parent company to abandon the renovation project. 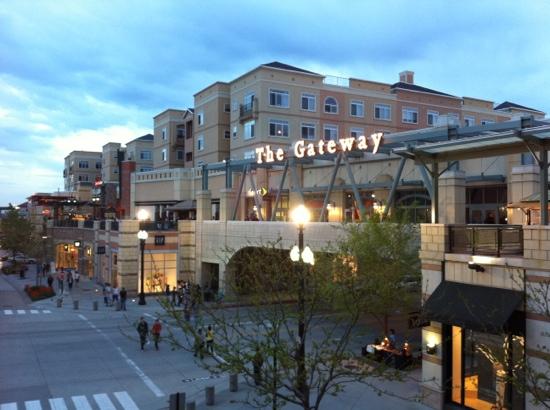 Retail Properties purchased the Gateway property in 2005 for approximately $144 million. At the present time, the Gateway center backs a loan for over $96 million and has been operating underwater for the past year. Last year, the retail center’s net cash flow fell to $7.6 million, a decrease of 22 percent that only provided 98 percent of the funds required to fully service the property’s debt obligations. While vendor occupancy in the mall increased to 83 percent during that time, the current year has set the stage for further decline. Occupancy rates have fallen to 78.5 percent, and Gateway’s income has only provided 73 percent of the funds needed to service debt obligations. While no mortgage payments have been missed on the property, the loan will likely soon be referred to Midland Loan Services, a specialty loan servicer.

During the past year, two separate deals to purchase the Gateway Salt Lake property, each valued at over $100 million, have both fallen through. Neither deal was completed due to uncertainty about the potential future performance of the shopping center and worries about competition with the nearby City Creek Center. In light of Gateway’s failed sales and decreasing performance, Retail Properties expects a continuing decline in occupancy rates and profitability for the mall.

In the coming months, Retail Properties’ strategy for Gateway involves working towards stabilizing the mall’s occupancy and performance white attracting the right buyer. They are currently working with several of the mall’s vendors, such as GameWorks, Barnes & Noble and Abercrombie & Fitch, to provide performance-based leases, in which the stores’ rents are calculated at a set percentage of the store’s monthly sales. With this and other measures, Retail Properties hopes improve the Gateway’s situation.