Click here to subscribe to Malls.Com's weekly email newsletter for free
Global 100 is categorized as a mixed-use leisure, entertainment, hospitality, residential and retail scheme situated on 400 hectares.  Within this massive site, there will be a 170 hectare theme park with attractions which have been influenced by international films from America, China and Europe. 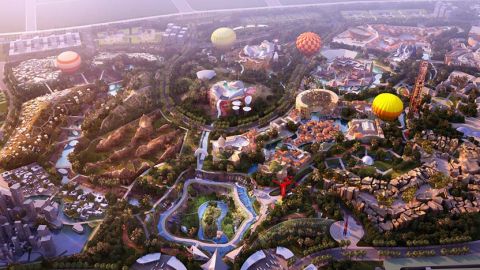 The task of master planning of this large project has been awarded to Chapman Taylor, a global leader in architecture with a specialty in this type of project.

The movie theme park is based in Haikou, Hainan, China and required an investment of 38 billion yuan (US$6bn).  The park will be important in boosting Hainan Island as the main tourist region in China, for both Chinese and international visitors.

The park comprises six different villages.  Each village is representative of different countries, including Germany/Switzerland, Spain, Italy, UK, Netherlands and China. Chapman Taylor will be providing the architectural design and concept for the villages representing the UK and China.

The UK village should offer visitors film characters such as James Bond 007, Mr. Bean and Alice in Wonderland, along with traditional country markets and villages, and historic castles.

The Chinese village will have features from the ancient Loulan kingdom.  It will have a fishing village feature, an indoor street and a massive ship based on the legendary story of ‘Zheng He’s Expedition’.  All the elements combined create a superb impression of the ‘The Great Silk Road’ journey.

The overall project will be developed in two sections.  Phase 1, which includes the theme park, is due to open for public visits during 2016.