How global brands are shaping the Metro Manila retailer landscape

The number of global brands in the Philippines has been rising, with more than 190 new international brands entering the country since 2008. The last three years saw a significant number of new foreign retailers in the market and 2014 served as the banner year with at least 45 new brands having entered the country. The young and growing demographics accompanied by rising income levels and a healthy stock of retail space offering competitive rents, altogether underpin this strong retailer interest in the country.

The Philippines has become one of the bright spots in the Asia Pacific region, posting an average gross domestic product (GDP) growth rate of 6.7% in the last three years. The services sector continue to post solid grow alongside a recovering manufacturing sector while share of household consumption fr om the country’s GDP continue to hover from 69-72% in the last six years. This robust economic growth has caught the attention of international retailers as they seek new markets outside the recovering economies of the west. 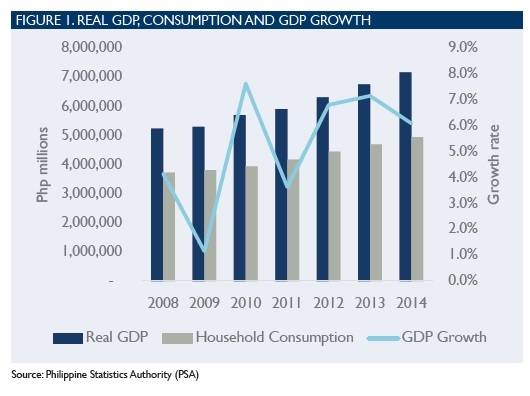 Despite the lower-than-expected 2014 GDP growth, the Philippines remain in a strong economic position moving forward. An expanding middle class, supported by the sustained growth of the business process outsourcing (BPO) industry and overseas Filipino (OF) remittances is driving healthy consumption, which should maintain the country’s attractiveness towards foreign retailers.

Healthy domestic consumption led by the young and growing demographics

The Philippine population grew annually by 1.9% from 2000 to 2010 and breached the 100 million mark last July 2014. An estimated 47 million of the country’s population belongs to the 20-64 year old age group, of which 71% is between 20 and 44 years old, suggesting a young and growing population. Assuming a decline in unemployment rate, the Philippines should enjoy economic gains from the growing working age population1, which is projected to account for 68% of the total population by 2045 according to the Philippine Statistics Authority (PSA).

The BPO industry and overseas remittances have been pivotal in expanding the country’s middle class2 as both sectors are key drivers of employment, rising income levels and in fuelling domestic consumption. As of end-2013, the number of deployed overseas Filipinos and BPO employees are at 1.8 million and 900,000 individuals, respectively. Modest job requirements3 and attractive compensation packages have attracted a large number of the young and skilled workforce to enter the BPO industry. Similarly, higher wages4 and strong demand for the Filipino workforce globally have encouraged the diaspora of a significant number of Filipinos abroad. 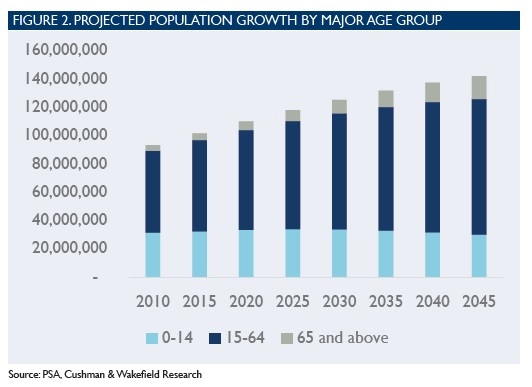 This increased wealth and rapid pace of urbanization have generated demand for a wider set of products and services, consequently, fuelling consumption. This robust consumption has encouraged the construction of shopping malls by major and boutique mall developers throughout the country.

Metro Manila shopping mall stock5 currently stands at 6.5 million square meters and could expand to 7.0 million square meters by 2017 as new shopping malls complete within upcoming mixed-use districts in the metropolis. Aside from the healthy pipeline, the Philippines also has one of the most competitive retail rents across the globe. Our 2014 Main Streets Across the World publication ranked the Philippines in 62nd place6 in terms of most expensive retail locations in the world. This competitive rent provides additional incentive for prospective retailers to enter the market.

Historically, foreign retailers partner with local distributors such as Stores Specialists, Inc., SM Group, Robinsons Retail, and Bench (Suyen) Corporation, among others, in their foray into the Philippine market. This allows these international retailers to leverage on the reputable track record, local expertise, and network, of these local distributors.

Another mode of entry for prospective international retailers is through setting up a wholly owned entity in the country. The Retail Trade Liberalization Act of 2000 allows foreign retailers to own 100% of their enterprise in the country under certain conditions. The bill seeks to open the local retail market to the global market. Among those that entered the country wholly owned include, Giordano, Nike, and more recently, H&M.

There has been movement to amend the existing law, particularly the restrictions on foreign participation, to enhance the appeal of the local market towards prospective retailers. If successful, we may see further growth in new international retailers in the country.

Solid consumption driven largely by the country’s expanding middle class has contributed to the growth of mid-range retailers. The segment currently captures around 79% of new foreign brands in the report.

Mid-range food and clothing retailers have exhibited the largest growth in the last seven years. Fast fashion brands such as Forever 21, CottonOn, and UNIQLO continue to take up large retail spaces, while quick service F&B restaurants/stores such as BonChon, Happy Lemon, and J. Co. Donuts, albeit taking up smaller spaces, are active in store expansions.

The entry and expansion of new and existing brands contributed to the uptick in retail activity within the luxury and high-end segment. New designer labels such as Hermes, Stuart Weitzman and Casadei have entered the Philippines while sel ect existing brands opened their first dedicated stores in the country. High-end watches Hublot, Baume & Mercier, Breitling, Tudor, IWC, and Jaeger-LeCoultre simultaneously opened their first stand-alone stores in Central Square in Bonifacio Global City last 2013. In addition, cosmetics brands Benefit and Clinique opened their first dedicated stores in 2011 and 2012, respectively. Sel ect existing brands also opened their new flagship stores in recently completed shopping malls within Metro Manila. However, these stores remain small and store expansions have been few and far in between compared to other countries.

An estimated 123 new brands covered in the report are western retailers. European brands, particularly from France, Italy and UK, led retail activity from the region. Alexander McQueen, H&M, Burton Menswear London, Stefanel, and Uno de 50 are some of the new European brands that took up spaces in shopping malls in Metro Manila.

Nevertheless, American retailers continue to have healthy presence in the country given the historical ties and cultural affinity between the United States and the Philippines. Sel ect new American brands in the country are Aeropostale, American Eagle Outfitters, Jamba Juice, Joe’s Jeans, Old Navy, Papa John’s and Payless ShoeSource.

The market is slowly changing as the number of Asian brands has significantly increased in the last three years. Asian retailers currently account for around 56 new brands in the country, translating to approximately 261 stores in Metro Manila alone, and outperforming North American (158 stores) and European (157 stores) brands. The high store count of Asian brands is due to the large number of F&B retailers fr om the region. Japan leads all Asian retailers with at least 22 new brands entering the market since 2008. Sel ect Japanese brands in the country include Muji, Royce, Sony, St. Marc Café, and UNIQLO.

Australian and Middle Eastern retailers also have a growing presence in the country. CottonOn, F&X, Patchi, Rubi and TYPO, albeit having small market presence, have had healthy store expansions.

The cities of Makati, Mandaluyong and Quezon host around 60% of the total number of stores by new global retailers tracked in the report. This is mainly due to the volume of new shopping mall space in these cities, which provide opportunities for entry and expansion by international brands. At least 106 flagship stores have opened within Mandaluyong, Taguig and Makati, which suggest the strong preference by international retailers to locate within these areas. Examples of flagship stores in these cities include, in Makati, Bershka, Stradivarius, INGLOT, and Jimmy Choo; in Mandaluyong, Carven, Crate & Barrel, Forever 21, H&M, and Herve Leger; and in Taguig, Casadei, Ever New, Hamley’s, Jamba Juice, Joseph, and Pottery Barn.

The low store count of international brands within the cities of San Juan, Las Piñas, Marikina, Parañaque and Pasig is attributable to the lack of new shopping mall space and close proximity of these areas to other cities with strong presence of foreign brands.

Luxury brands have the highest store count in Mandaluyong and Makati wh ere the Ortigas and Makati central business districts (CBDs), respectively, are located. BPO and corporate firms, as well as middle- and high-income subdivisions in the locality of these CBDs serve as strong catchments for luxury goods. As of this writing, new luxury and high-end brands tracked in the report have little presence in Quezon City and Muntinlupa.

The low number of upscale brands in Quezon City is reflective of the pre-dominance of middle-income households surrounding shopping malls within the city. This should enhance the appeal of the city towards mid-range retailers and suggest potential growth for prospective luxury and high-end brands. Meanwhile, the weak interest of new upscale retailers to locate within Muntinlupa may stem fr om the limited prospective market in the area compared to the more diverse and wider catchments of Makati, Mandaluyong and Taguig. 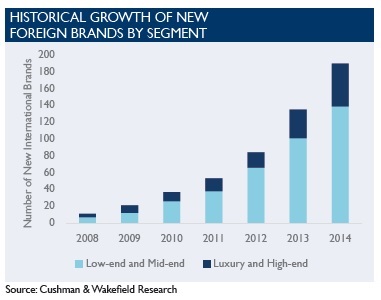 There remains keen interest fr om international retailers to enter and expand their footprint in the country. This is evident in the sustained healthy partnerships between local distributors and foreign brands. Robinsons Retail announced last year that it is bringing in Costa Coffee, a UK coffee chain, to the Philippines. Moreover, majority of committed spaces within newly completed shopping malls are by foreign brands. In addition, international retailers are replacing older tenants in select existing shopping malls.

There is also renewed interest fr om current and formerly existing brands in the country. Japanese restaurant Nanbantei of Tokyo and clothing brand Eddie Bauer have opened up their expansion stores after more than five years being in the country. Ice cream store Baskin Robbins re-entered the market in 2014, setting up shop within Central Square building in Bonifacio Global City (BGC).