Add a photo Write a review
EDIT TEXT
Multikino is the second largest multiplex company in Poland and has the distinction of having presented the country first multiplex, which located in Poznan. Cinema City is Multikino's primary competitor. The company started its operation in 1995 as a joint venture among ITI Cinema and British UCI. In 2003 ITI acquired the UCI shares and owned the business until 2013.
All Multikino cinemas provide a full entertainment offer including top movies, film premiers with celebrities as well as other events such as film marathons, concerts, live sport, opera and ballet transmissions in HD quality, and cabarets. Multikino is among the leading cinema operators worldwide regarding digitalization and implementation of 3D technology across its premises.

Multikino today operates 231 screens in 28 locations across Poland including the multiplex in Lodz under the brand Silver Screen. In August 2010 Multikino opened its first cinema in the Baltics – Mutikino Riga Plaza in Latvia, with eight screens and 1620 seats in Latvia, followed by Multikino in Vilnius in Lithuania with seven screens and 1547 seats, which opened in September 2010.
MALL STORE LOCATIONS: 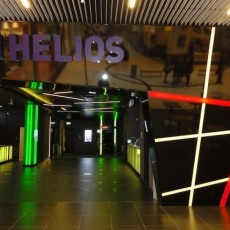