Redevelopment plans for the Stadium Shopping Center have been revealed by the owner.

The owners, Western Securities have had this plan in hand for years and it includes the demolition of the 1960s strip mall, to be replaced by eight new buildings with a range of uses.

This final plan came to fruition after many consultations with the community, who opposed the application during its period with the city council. Residents believe that the plans are too large for a small site and will cause traffic congestion on 16th Avenue. However, their objections were rejected by the city council and the redevelopment was approved.

The president of the University Heights Community Association, Peter Khu, said their main concern was the effect of the project on access to the Foothills hospital, which is an important cancer and trauma centre in the south of Alberta. A further concern is that the project is being built on private and municipal land, which creates a problem not only for that particular neighborhood, but for the entire city as it affects the corridor which runs from Banff Trail to the city’s edge.

A redevelopment permit will be applied for by Western Securities within a few months. 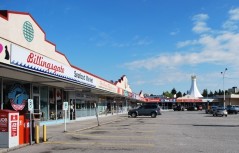