Ground has been broken on a $340 million mixed-use development, and renderings of the completed project are absolutely stunning.

Click here to subscribe to Malls.Com's weekly email newsletter for free
The Gateway City of St. Louis, Missouri will soon have another attraction that will also help remake the city’s midtown district. As Shopping Center Business reports, the ground has been broken on a $340 million mixed-use development, and renderings of the completed project are absolutely stunning.

City Foundry Saint Louis at Cortex is a redevelopment project at the former site of the Federal Mogul Foundry. The area where the project will come to life is known as the Cortex District, which is a 200-acre section of the Midtown area that is centered around numerous technology and research buildings. The project comes to us from Lawrence Group, which heads up a development team that includes investment partner Bull Moose Industries, construction manager Midwest Services Group, retail leasing brokerage CBRE, office leasing brokerage DCM Management, and financing partners Eagle Bank and Advantage Capital Partners.

All told, the project will be absolutely massive upon completion. For the first phase alone, plans call for 133,000 square feet of retail that is expected to house 45 retailers. There will be 124,000 square feet of creative office space, as well as 48,000 square feet of space that are earmarked for restaurants and food halls. In what will certainly be a welcome addition to the area, as many as four full-service restaurants and roughly 20 food stalls will be part of phase one. Amenities on tap include public plaza spaces, electric recharging stations, a bike sharing system and a dedicated spot for ride-sharing drop-offs. Additionally, there will be a connector trail to the Great Rivers Greenway Trail System and a parking garage that will include space for 511 vehicles. 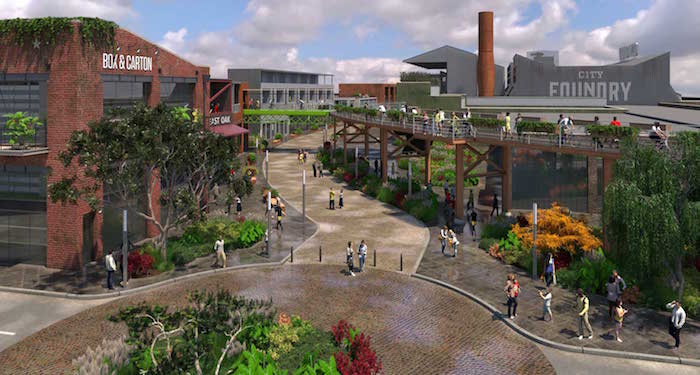 That sounds like enough to transform the area, but that’s far from the only plans in the works. Phase one is expected to be completed in 2018, and there are some exciting plans on tap for future phases. Future plans include the construction of a 279-unit residential tower, 16,000 additional square feet of retail, and the addition of as much as 265,000 square feet of office space.

City Foundry Saint Louis at Cortex is an ambitious project that provides yet another example of how enterprising developers are helping to remake large sections of cities across the United States. Mixed-use developments and the concept of ‘live,work and play’ continues to gain traction, and cities and towns now have one more project to look at for a little inspiration of what’s possible.