Lincoln Road is in transition as it sees an influx of new capital from New York institutional investors.

Click here to subscribe to Malls.Com's weekly email newsletter for free
Florida’s top pedestrian mall looks set to reinvigorate its appeal in the months that follow with a drive to channel its plush diversity, culture, and eccentricity into a make-over attempt that’d see it become more community-driven, vibrant, and a melting pot for experiences befitting of a high-class pedestrian street.

Lincoln Road has been on an upward march for the better part of the last two decades. Its identity as one of the popular destinations for visitors to the South Beach Area has shot up pedestrian traffic, increased influx of major national and international brands, and in extension, put a fire under real estate prices. As a result, building prices have risen sharply with a 20-fold increase in less than 20 years, with no signs of the push abating any time soon. The story is similar for rent.

And as the pedestrian population becomes more diverse by the day, corporate giants snag up prime real estate, and amenities are stretched to the limit, Lincoln Road faces a formidable challenge.
Lincoln Road must now grow into a peculiar word-class High Street that admixes the essence of the local community and the retail energy of the International behemoths, in a way that serves both locals and visitors from around the globe. 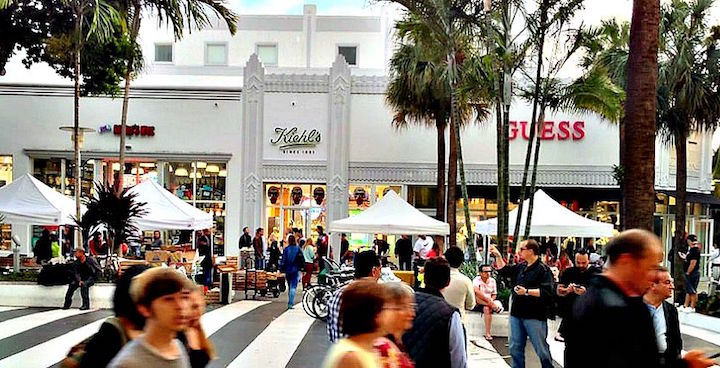 This goes beyond the occasional touch-ups—the renovation in 1997 by Martha Schwartz, the closure of traffic at the west end of Lincoln mall in 2006, the urban oasis created by Raymond Jungles in 2010, or the landscaping is done in 2014.

To this end, the Lincoln Road Business Improvement District (LRBID) penciled Ilona Creative Studio to give Lincoln Road a new brand characterized by a vastly enhanced and immersive experience. The goal is to showcase idyllic elements of culture and arts as well as unveil events that astutely define the cemented regal identity of Lincoln Road.

To concoct a new long-term direction that would complement Ilona’s efforts, the City of Miami Beach beckoned on James Corner’s Field Operations—famous for designing The High Line in Manhattan.
Field Operations came up with an extensive Master Plan compartmentalized into three phases. Field Operations will also be in charge of the implementation and supervision of the Master Plan.

The pillars of the Master Plan are considerable operational and physical enhancements of the pedestrian portion of the pedestrian mall. These enhancements would also apply to adjacent streets.
The enhancements would take the form of making provisions for spaces where art would be installed and freeing up more surface area for public seating. The pavement design would undergo a revamp to give the road more flair and to offer an immersive experience to users.

Work on the first phase, Phase one, would begin in the Spring of 2018. Rehabilitation efforts will extend from Washington Avenue to Lenox Avenue during this phase.

Furthermore, on the checklist of tasks to complete in this phase are:
• Making the Drexel and Pennsylvania Avenues pedestrian
• Expanding crosswalks
• Adding bike lanes to Meridian Avenue
• Removing the existing median with the aim of allocating space in a more refined way

The last time similar extensive remodeling was done on Lincoln Road was in the 50’s when Morris Lapidus transformed the road from an average shopping street with traffic to one of America’s first pedestrian mall and one of the city’s most prestigious destinations, complete with fountains, shelters, gardens, and an amphitheater.
Building upon this extraordinary legacy is central to Lincoln Road redesign and aptly recognized by the LRBID. Steve Gombinski, President of the LRBID captures this understanding in his statement that opines that the revamp is all about “revitalizing and updating the historic Morris Lapidus designed public space.”

Reimagining the Concept of an Immersive Modern Pedestrian Mall

Going forward, Lincoln Road would supplement its exquisite expression of structural art with an exciting mix of performance arts.

Acts by international, national, and local artistes would also be a regular feature. With streetlight banners, wall wraps, and large-scale projections—replete with 3-D mapping—Lincoln Road will take street entertainment to an all-new level, and give users a unique, breathtaking, immersive experience each time they visit.