Click here to subscribe to Malls.Com's weekly email newsletter for free
The newest open-air corridor at Hilldale Shopping Center was unveiled Tuesday after nine months and $15 million worth of renovation. And while the 14 stores and restaurants will gradually open through the summer, including six this week, the new corridor offers more open space and better access to retailers.

Those stores include national retailers like clothier Lucky Brand; kitchen store Sur La Table; kate spade, known for its handbags and women’s clothing (opening Friday) and LUSH, a store that specializes in handmade cosmetics and scheduled to open June 12. But there are also independent offerings in the corridor, located between Macy’s and Metcalfe’s Market.

Mes Amies, a dress shop that had been in Chicago since 2009, is now at Hilldale after its owner wanted to be closer to family in Madison.

The improvements to Hilldale are seen as a way to make one of the city’s oldest shopping destinations compatible and contemporary. 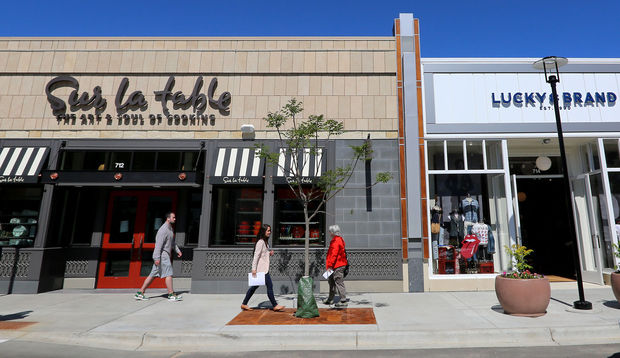 Hilldale, now with more than 50 retailers, had been owned by Chicago-based Joseph Freed & Associates, which bought the mall in 2004 and spent millions of dollars on upgrades that included the addition of parking garages and a street scape corridor on the east side of the property that includes restaurants and retail shops plus a Sundance Theatre. After financial struggles hit Joseph Freed, WS Development bought the shopping center in 2012 at a sheriff’s auction for $52 million.

WS Development is now studying the south side of the shopping center and looking at plans to create an open air-corridor between Macy’s and Sundance. The design has not been decided but discussions are underway with tenants.

Other stores that will open in the renovated space on the north side of the shopping center include Michael Kors, Waxing the City, Cornblooms, Madewell, and Sperry Top-Sider.

Cafe Hollander, a Milwaukee-based restaurant and craft beer bar, is scheduled to open by this fall on the west side of the shopping center and across the plaza from Morgan’s Shoes, Stride Rite and New Balance, locally owned stores long associated with Hilldale.