Competition between property companies for malls


Recently released figures indicate that shopping center transactions are set to break records during this year.

Click here to subscribe to Malls.Com's weekly email newsletter for free
In the UK, nine shopping centers watched by DTZ have already shown transactions to the value of £717m for the third quarter, with pending offers of £1.17bn. When comparing these figures to the same period last year when it was £833m, this year is set to break records. Based on a sample size of 40 centers, the investment volumes have topped £3.5bn.

Large companies, such as Orion Capital, AXA and Land Securities are all currently involved in large transactions, including centers such as Telford Shopping Center, Hammersmith Broadway, London’s Fulham Broadway and Bristol’s Cabot Circus.

The largest transaction to date has been that of the 30% share in Bluewater from Len Lease to Land Securities. The price of £696m was in excess of £300m more than the transaction in second place. Investor demand was strong for this property and there were 10 interested parties. They high ultimate yield of 4.1% is indicative of the market value of the asset.

Along with the centers which have already been sold or which are under offer, there are 30 more centers which are on the open market, at a value of £887m. Investment levels for shopping centers have reached about £3.5bn this year, which is an increase on 2013. This is a clear picture of the changing demand in this particular property sector.

The Head of Shopping Centre Investment, Barry O’Donnell, stated that the volumes have already overtaken last year’s and a strong close to this year is expected. 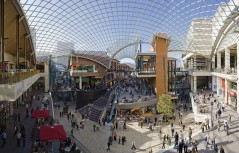