Approximately 1.3 million sq.m of new shopping centre space was delivered across Europe in the first half of 2016, which was 7% less than in H1 2015. This took existing shopping centre floorspace to 156.3 million sq.m as of 1st July 2016. Turkey and Russia were, once again, the most active countries in terms of development, accounting for more than 40% of all completions across Europe in H1 2016. 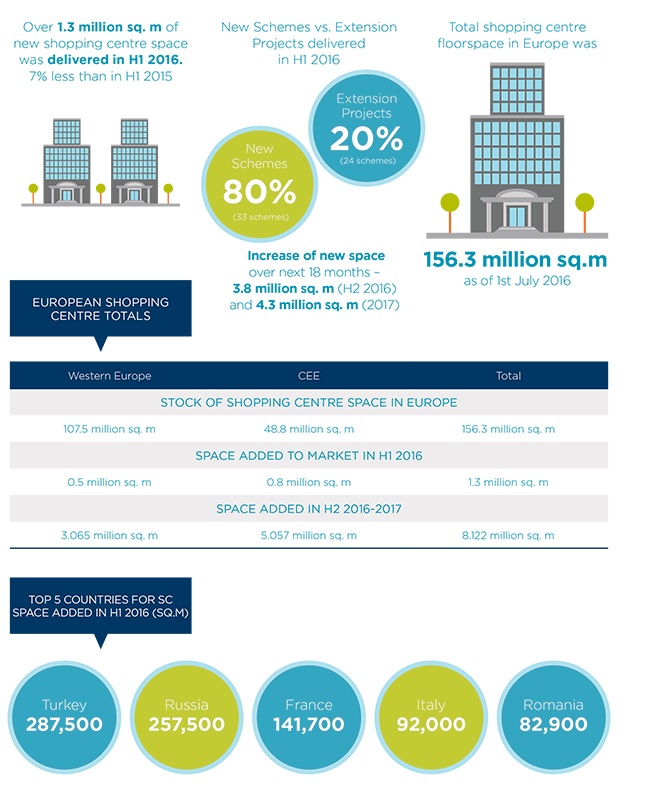 Key openings included the 100,000 sq.m Riviera scheme in Moscow, the 92,000 sq.m Arese shopping centre in Milan and the 69,000 sq.m Avion Söderslätts Handelsområde in Umeå, Sweden. Development activity is forecast to accelerate in H2 2016 and in 2017, with 8.1 million sq.m currently under construction and expected to be completed in this period.

Property owners are working harder than ever before at understanding changing consumer shopping trends and the needs of modern retailing. They are also responding to the evolving role of shopping centres in communities and this is being reflected in the planning of development projects throughout Europe. Both new construction and re-development projects at the larger end of the scale, as well as mixed use schemes, are seeing food & beverage (F&B) operators and leisure facilities featuring highly, as landlords look to raise footfall, extend dwell time and increase turnover. Incorporating new technologies is also becoming an increasingly important factor in the development of any successful scheme.

London, Bristol, Edinburgh, Barcelona, Munich, Ankara, Istanbul, Sofia and Bucharest are among the top locations in terms of future shopping centre development potential. This is due to a combination of strong macroeconomic fundamentals and low market saturation. In some Western European markets, there is a preference for high streets over shopping centres, which could limit future development potential, while in Central and Eastern Europe (CEE), regional geopolitical uncertainty remains the biggest downside risk.

European shopping centre investment volumes reached €8.5 billion in H1 2016 – a fall of almost 50% on H1 2015 and a significant drop when compared with H1 volumes in the last three years. There has been a significant dip in trading volumes in Western Europe, which is primarily due to the shortage of prime stock, with investor demand still robust. Investors are increasingly looking to CEE markets for opportunities, with the CEE region recording a 17% year-on-year increase in investment in H1 2016. The best performing markets in this region were Poland, the Czech Republic, Slovakia, Romania and Hungary.