France retains its dominant position in the European hierarchy as the largest shopping centre market. Russia follows in a close second with overall stock only 4% lower than France; however, with the average scheme size larger, Russia only has half the number of shopping centre schemes. Development activity was the highest in Russia over H2 2015 and, in addition, the country has the largest 2016-2017 development pipeline in Europe – although there is some speculation that not all schemes will complete as the faltering economy impacts consumer spending and the ability of retailers to pay top rents. 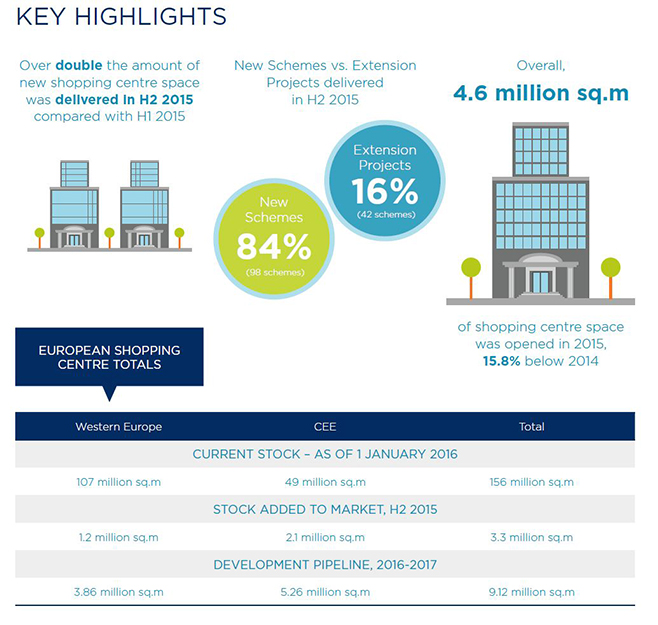 In H2 2015, there was a trend in Central and Eastern Europe (CEE) to focus on building new sizeable projects, such as the 110,000 sq.m Zelenopark in Russia, the 61,500 sq.m Podium Ankara in Turkey and the 51,000 sq.m Zielone Arkady in Poland. On the other hand, extension projects represented only 12% of total new space, and this trend is expected to continue, accounting for an estimated 9% share of the total amount of new space in 2017. Conversely, shopping centre extensions play an important role in development activity in Western Europe, where sizeable land parcels are scarce and often complicated to assemble. As a result, extensions accounted for 24% of total new space in H2 2015. Going forward, this activity pattern is expected to grow, with extensions representing 36% of total new space in 2017 as landlords look to upgrade and improve their offering in what is an increasingly competitive retail scene. Indeed, mixed-use schemes are becoming more common, with the addition of office space, residential as well as entertainment and leisure units with the aim of increasing footfall and drawing in consumers for longer periods of time.

In terms of future shopping centre development activity, the core British cities – London, Edinburgh, Cardiff and Bristol – as well as Barcelona in Spain represent locations with good development potential; on the other hand, high street retail provision in most West European cities is strong. In CEE, solid growth prospects are seen in Ankara, Istanbul, Sofia, Prague and Riga. These cities represent the locations with low market saturation and strong economic fundamentals; however, while consumer demand may be evident, geo-political risk factors need to be carefully considered alongside any future development.

Turning to the investment market, across Europe €15.5 billion was invested in shopping centres in H2 2015, representing a 16.6% year-on-year growth. The UK and Germany remain the most sought after markets, accounting for over 45% of total trading volumes. However, significant growth in invested capital was seen in the Nordics, Benelux, Portugal, Poland, Turkey and Germany. In contrast, France, Italy, Spain, Romania, Slovakia and the Czech Republic registered noteworthy declines in comparison to H2 2014.